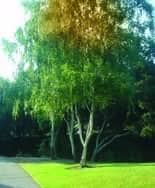 A Preventative Borer Control application (for Ash, Birch and other potential trees) will protect your trees from the new, exotic Emerald Ash Borer and your Birch trees from the common, native Bronze Birch Borer. Both of these insects are devastating insect problems that work rapidly and can kill mature trees in one to two years. The Emerald Ash Borer has killed over 30 million Ash trees in Michigan and has had numerous occurrences in Indiana, Illinois, as well as Wisconsin. This insect could be potentially the most devastating insect problem in years due to the abundant use of Ash as street trees in many communities. The Bronze Birch Borer is an extremely common insect problem that has killed many Birch trees throughout the Midwest. Fortunately, these insects can be controlled by the use of a systemic insect control applied as a preventative control on a yearly basis in the spring. Naturescene® will apply this product as a soil drench under the canopy. The product is absorbed up throughout the tree, protecting it from the larval damage of the insect. This product needs to be applied as a preventative because if canopy dieback is observed, the translocating ability of the tree has already been compromised by the damage from the larvae in the tree. This damage makes it more difficult for the product to be absorbed into the tree. We are offering this treatment at a very reasonable price.

Remember, mature trees increase the value of your home considerably and provide comforting shade in the summer. It also costs $200 to $500 or more just to have a tree taken down and removed.

If interested in this beneficial application or any of our other services, please call your nearest Naturescene® location today.

The Emerald Ash Borer adult is a metallic green beetle about 1/2" long. Adults begin emerging in early June with peak emergence in early July and extending throughout July. The adults will feed on the leaves, leaving irregular shaped edges. Egg laying occurs in the summer and the Borer goes through several larval stages in July, August and September when it tunnels under the bark. This is the serious, damaging stage of the insect because it girdles the translocating tissues of the tree. The insect overwinters as a full grown larvae. The adults begin emerging the following spring through D-shaped exit holes. The borer will kill all native Ash trees, excluding Mountain Ash. Distressed trees are more vulnerable, but it will kill vigorous, mature trees also.

Ash trees (Fraxinus species) are easily identified if several simple factors are understood. Ash is unique from other trees because of the following distinctive characteristics: opposite branching and a compound leaf. Remember, mountain ash (Sorbus) is not a true ash (Fraxinus), and is not affected by the Emerald Ash Borer. 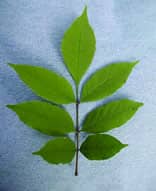 A compound leaf is one that has more than one leaflet along its stem. Ash typically have approximately 5-9 leaflets per leaf. (As opposed to a simple leaf which has a single leaf joined by its stem to a woody branch.)

The Bronze Birch Borer is another serious borer insect of white-barked Birch trees. As with the Emerald Ash Borer, treatment should be done as a preventative or at the initial signs of canopy dieback. The adult is a dull metallic bronze in color and about 1/2" long. Adults emerge about the same time as the Emerald Ash Borer, in late May-early June. Larvae form winding galleries in the cambium of the tree, girdling branches and disrupting the flow of water and nutrients in the tree. As with the Emerald Ash Borer, dieback begins in the upper portions of the tree. D-shaped exit holes with a rusty colored stain may also be visible on the bark, created by emerging adults. This is another serious insect problem that has killed many Birch trees and treatment as a preventative or in the early stages is important.

Your Naturescene® specialist is committed to making you happy with our service and your lawn and landscape. If you are not completely satisfied with the results of our services or you have any questions or concerns, please call your area branch office and we will be happy to take care of them free of charge within 72 hours.

At all of our 41 locations